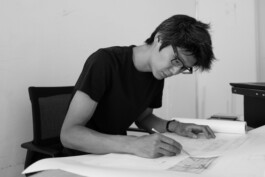 Recently, I had the privilege to interview architect and photographer, Daisuke Hirabayashi. Daisuke designed the BAC interior and I was given the awesome opportunity to ask him some questions regarding his career.

"Was it a childhood dream of yours to become an architect?"

Matter of factly, it wasn`t always Dais` dream to become an architect and a photographer but, like many 70`s and 80`s kids, he too wanted to become Mike. Mike Jordon to be exact, he added with a little chuckle. Daisuke continued explaining that his dream was to become a pro basketball player, like his childhood idol, not an architect or photographer but later he ended up attending an Art University and ultimately studied architecture.

Can you tell me about your current job? What do you do on the daily - career wise?

Dais explained that, as of right now, he isn`t doing much architectural wise. This is because the piece he is currently working on has been put on pause. The design portion is finished so, he is waiting for planning permission to start construction.

What does a typical week look like for you - work wise?

By using his previous week as a prime example, Dias was able to paint me a picture of what his average work week looks like.

The rather cramped list included many trips to visit and speak with other architects – mostly in the outskirts of Basel, but also a few gigs towards the city center. With these architects, Daisuke discussed essential details; such as how and when they should do the photoshoots of the architectural projects.

I remember Daisuke mentioning he had already taken shots of a buildings’ unfurnished interior, and that the new house guests have settled in since. So, the plan was to get a few images of the furnished house as well as the exterior. A trip to Zürich, Switzerland was on the previous week`s to-do list as well. In Zürich he worked on a photograph layout for an architectural magazine known as the Hochparterre Magazin.

This sounded like a lot of work, so I asked Daisuke

How has Covid-19 impacted your work life?

He explained that the impact hasn`t been as substantial as it was for other lines of work. He was supposed to have a photoshoot in the States, so this could no longer happen because of travel. “I think that right now in the architecture and photography field, I don’t think that the impact is now but more in the future because what the projects that I`m photographing right now started 5, 4,3,2 years ago, so now they are finishing. It`s from now. Are people going to start projects? Are people going to ask to start projects? Things are uncertain maybe their financial situation has changed, so it`s very different from a restaurant, where you had to close now, like in March…or a hairdresser or whatever you know” he says while touching his hair “You just had to close, it didn`t happen for me. I kept on photographing because I`m actually alone in buildings usually” Daisuke catches his breath “Architects need photos. Before people move in for example, so you go, and you do it. So, I think end of this year, next year, 2021 people will start to feel it in this field. It was the same during these financial crisises and crashes that happened in the past. Architectures are always on a delay”

Taken aback by all of his obligations and by how differently Covid impacts the architectural world, I began to ask him: “What skill has served you best in your current career? »

Daisuke is convinced, that the traits that have serve him best in his current career, are his genuine interest to learn more, his willingness for self-learning, as well as his curiosity and ability to ask on the nail hitting questions.

When looking at images of Daisuke`s previous architectural designs, I thought I had noticed habits. So, I asked him: “Would you agree that you have a signature style? If so, how would YOU describe your signature style?»

«No, I find it dangerous” Daisuke replied and paused before continuing “I find it dangerous to adapt a signature style because then the danger of putting self-imposed rules arises. Then you tend to put self-imposed rules to force on a project; whereas if you don`t force something, you have more freedom and this is more liberating because then you really look at each project as a specific situation and that allows for new possibilities and specific outcomes. If you have a set thing in your mind; it can`t come out good because you are forcing it to happen.”

My next question was fitting because we were talking about design. “What do you think is special about the project design of the Braswell Arts Center? »

“I think that openness and flexibility. It can accommodate. I mean the main thing is dance classes but then they can host concerts, they can have art exhibitions, and this was from the beginning, when I started speaking with them, this was very important. So, all the furniture is on wheels, the ceiling spotlights are adjustable, you can move them around and I think the only permanent element are the triangular acoustic foam panels on the ceiling. Ok, you can take them down. They aren’t permanent, permanent but no wheels on them.”

I thanked Dais for meeting up with me but didn`t shake his hand to be Covid safe.